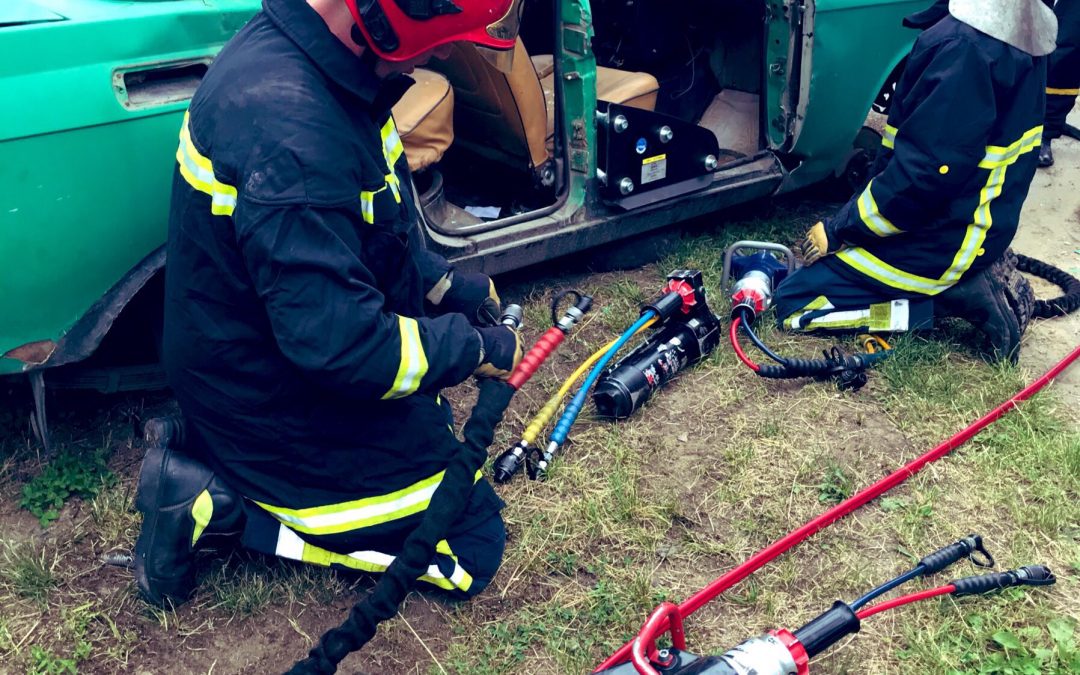 On average there are 4,000 fatalities on Ukraine’s roads each year, all of which are preventable. In response to this, two of FIRE AID’s founding members, the Eastern Alliance for Safe and Sustainable Transport (EASST) and Kent Fire and Rescue Service, have teamed up to deliver a joint project aimed at improving immediate post-crash response in Ukraine.

Funded by FedEx Express Europe under social responsibility platform, FedEx Cares, the collaboration strives to reduce the number of deaths caused by road traffic incidents by providing training and modern equipment to fire services in two major regions of the country – enabling them to respond to incidents quicker and more effectively. 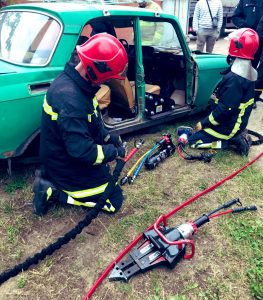 On 12th August, a convoy of three fire vehicles filled with equipment donated by several UK fire services, left the UK and travelled over 1,400 miles across Europe to Ukraine. Arriving in the city of Korosten, in the Zhytomyr region on 15th August 2019, where the first two vehicles were donated, a team of four volunteer fire fighters from Kent Fire and Rescue Service, together with EASST’s Project Manager, Claire Hoyland, were welcomed by the Mayor, local media, and the Chief of the region’s fire service. The Main Department of Fire and Rescue Service in Zhytomyr region were delighted to receive the donated equipment, which included personal protective equipment and road traffic collision sets. Although redundant to UK fire and rescue services, such equipment is still perfectly useable and of value in Ukraine, where equipment is often old, outdated or absent entirely.

Our team of fire fighters from the UK dedicated a day training local services using the new equipment, with special focus on the 12 modern road traffic collision sets which were donated. These will be shared among eight fire stations in the Zhytomyr region, which has several major roads passing through it. Local fire fighters were particularly impressed with the new extraction techniques demonstrated. 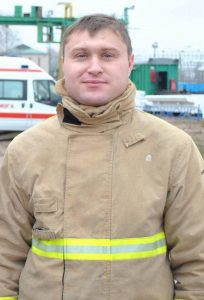 Andrey Grishchenko, Station Manager from Korosten, said: “The techniques shown are new to us but will undoubtedly be very useful. Just last week we attended an incident where a bus driver was trapped in his cab. Using this technique and having the benefit of this new equipment, we would likely have been able to save the drivers life.”

The region’s fire chief, Colonel Butrimovych Mykhailo, has already suggested that this training be replicated across the Zhytomyr region.

Following this training, the team drove the third fire vehicle on to the capital, Kyiv, where they delivered a second day of training to a further fire-fighting crew on the remaining donated equipment. The Kyiv fire service were particularly pleased to receive donated chemical decontamination equipment, given the region’s exposure to the effects of the Chernobyl disaster.

Danny Ayles, volunteer fire fighter, Kent Fire and Rescue, spoke of his experience: “I was humbled with regards to how lucky we are in the UK to have such modern equipment and regular training compared to countries like Ukraine. I had goose bumps knowing we had been able to deliver something so valuable by participating in this project.”

Rock Sherman, Vice President Road Network Europe, FedEx Express said: “As a company that has thousands of vehicles traversing a European road network at any one time, FedEx Express continues to invest in charitable collaborations in the road safety space. Together with EASST, we have embarked on three simultaneous projects where we hope to strengthen the ability of the organisation to build capacity among alliance organisations. This particular project stood out to us, not only as an opportunity to deliver a direct impact for the fire fighters and services that have received training and equipment, but because projects like this one mean local fire services are better positioned to respond and manage road traffic incidents, improving the safety of Ukrainian roads for all users.”

Claire Hoyland, Project Manager, EASST said: “We hope this is the beginning of a wider project to improve the capacity of fire services to respond to road traffic collisions across more regions of Ukraine. The support is clearly needed and the local fire services were so enthusiastic and grateful for the donations and training we have been able to provide through this collaboration.”

We would like to thank FedEx Express Europe for making this project possible and to project partners EASST and Kent Fire and Rescue. We would like to extend our thanks to Oksana Romanuka and Alex Heraimovyhch, our in-country project managers, and lastly, to Michael Pitney for arranging equipment, training and volunteers to support the project.