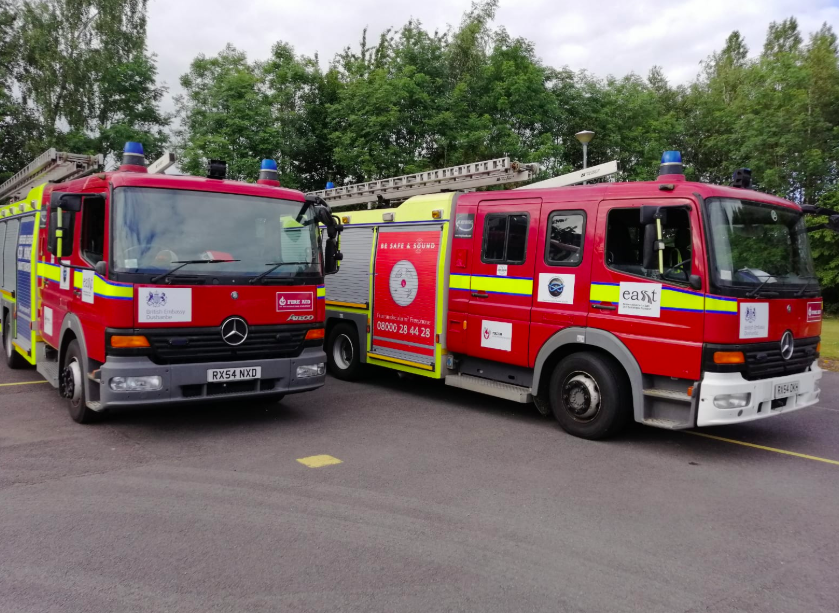 Following the mountain and road rescue training delivered in Tajikistan by our members the Eastern Alliance for Safe and Sustainable Transport (EASST), Staffordshire Emergency Services Humanitarian Aid Association (SESHAA) and Women in the Fire Service (WFS) in March 2019, a team of 5 SESHAA volunteers left the UK on 22nd June to handover two fire appliances in Belarus to fire fighters from the Republican Fire Service of the Ministry of Internal Affairs of Tajikistan.

SESHAA has been working in Tajikistan since 2015, and has established a great understanding of the needs of the fire service as well as a productive on-going working relationship with the service. With road fatalities each year in Tajikistan averaging 1,543,Tajikistan has some of the world’s deadliest roads but their service is hugely under-funded, resourced and trained. SESHAA’s team of instructors identified the need for modern fire appliances to improve response times and enhance efficiency. The two appliances were donated from London Fire Brigade (LFB) and presented to FIRE AID by Deputy Commissioner and Director of Operations, Tom George who said:  “I am really pleased to donate two fire engines to Tajikistan. With some of the world’s deadliest roads, it was heartbreaking to learn that 20% of road fatalities there are children.”

The appliances were filled with modern equipment, kindly donated by FIRE AID member the Scottish Emergency Rescue Organisation (SERA), and included two road traffic collision sets which will help extract road crash casualties quickly and safely; therefore improving their chance of survival. SESHAA’s Gareth Proctor said: “it is an honour and a pleasure to assist fire fighters from Tajikistan”. This is a great example of collaboration and support between FIRE AID members and we are pleased to have facilitated this.

The team arrived in Minsk, Belarus on 26th June after driving over 1,500 miles!They were hosted by international fire services along the way, including an overnight stay in Krostzynie, Poland. On arrival, the team were supported by the Belarusian Auto Moto Touring Club (BKA) and the UK Embassy in Belarus, who hosted a handover ceremony at the University for Civil Protection. Irina Potyakina of the BKA said: “We were pleased to provide all the necessary assistance to both teams.  As BKA is involved in road safety we know, first-hand how important it is to provide modern equipment and appropriate training to effectively respond to different kinds of incidents. Together we carry out the same important work: saving human lives.” Following the ceremony the appliances will make their way back to Tajikistan, driven by the fire fighters from Tajikistan. SESHAA’s convoy leader, Gary Dumighan stated: “This project is a great example of 3 countries, the UK, Belarus and Tajikistan collaboratively working for one common goal. I would like to thank our partners in Belarus for your hospitality; it was truly humbling.” This was echoed in HMA Fiona Gibbs speech: “rescuers are always ready to assist each other and strengthen their cooperation.” 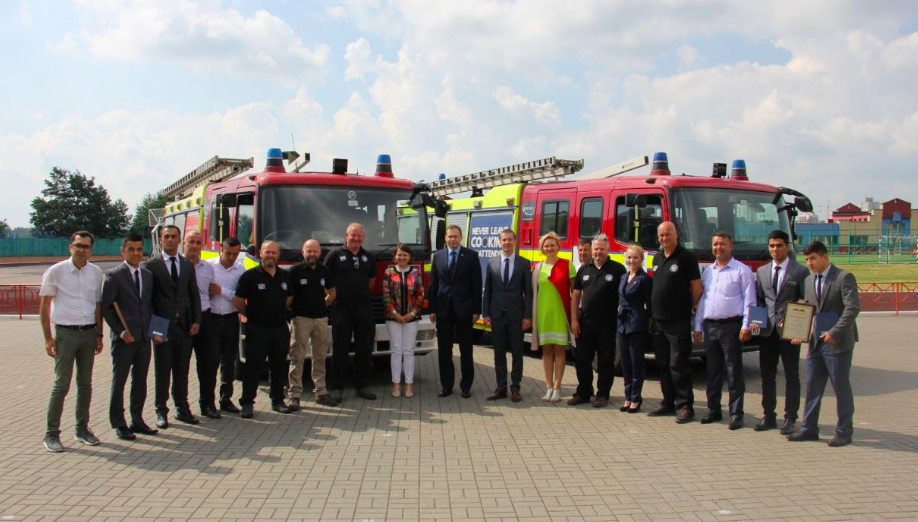 We would like to extend our special thanks to HMA Fiona Gibbs and her team in Belarus, to Irina Potyakina of the BKA, to Kier for both equipment and staff time and to Commissioner Danny Cotton and Tom George of LFB. As well as project managers, Gary Dumigham and Paul Radcliffee of SESHAA and Claire Hoyland of FIRE AID. A final thanks to HMA Hugh Philpot and Jonathan Layfield of the UK Embassy in Tajikistan for your ongoing support.